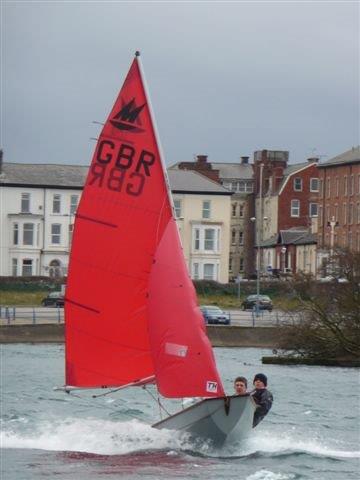 Like a lot of brilliant ideas, the Mirror dinghy literally "just growed". In fact, the first seed was planted by a small boy who complained to his father that when the family dinghy was being used he never had the chance to sail because others always muscled in. Normally, that would have been the end of the matter but, in this case, the lad's father was BBC TV s do-it-yourself expert Barry Bucknell, who characteristically set about making a dinghy to increase the family fleet and train up another helm at the same time.

Always ready to discover an easier way of doing things, Barry adapted for his dinghy a system of construction used by Ken Littledyke to make KL canoes by joining adjacent panels with resin and fibre glass ribbon. When it was completed, it was seen by one of the Daily Mirror writers, Paul Boyle, who knew Bucknell and being an ex-Navy man himself, chatted to him about the unusual design. At that tine, the newspaper's Publicity department was always ready to look at new ideas for promoting the newspaper and, after a lot of discussions, it was thought that boats bearing the name "Daily Mirror" might usefully keep the name before the public. However, newspapers are ever sensitive of their vulnerability towards complaints by readers and so the publicity executives needed to be absolutely positive that any boat bearing the name of the paper must be 100 per cent safe and foolproof.

It was an easy step, therefore, to consult an expert within the Group, Bernard Hay man of Yachting World, who, in turn, suggested that Jock Holt should cast his experienced eye over the project. Jack inspected the second prototype made by Barry and decided to retain the construction method and the general lines of the boat, yet treat the hull concept as a radically new design. The third boat to be produced, therefore, looked quite different to its predecessors and yet boasted the same jaunty aspect.

Two of the most radical changes were suggested by the Daily Mirror Publicity staff who suggested the Viking red sails to match the paper's front-page title (the original prototypes had blue and white mainsails) and they also designed the insignia. The third prototype, Mirror dinghy No. 1, came into being and it is this boat which the National Maritime Museum at Greenwich considered important enough in 1986 to put on permanent display as an important example of our national nautical heritage.